MuscleSport’s mission with Rhino Black Pumped was to create a premiere pump product that the competition couldn’t touch. By using the best ingredients, novel compounds, and proper dosages, nothing comes close to Rhino Pumped. It covers every angle of the pump and performance by increasing nitric oxide production, enhancing blood flow and cellular swelling, and optimizing mental focus.

PeakO₂™ is an organic-certified combination of six Ayurvedic mushroom strains grown and harvested right here in the U.S. These mushrooms are powerful adaptogens, which allow athletes to “adapt” to and overcome physical and mental stress, giving you the extra edge you want to take your training to the next level.

7 days is all it takes. In a clinical trial conducted at the University of North Carolina, Chapel Hill, PeakO₂™ showed a substantial increase in performance. Now imagine what it could do as part of your daily workout routine.

L-Tyrosine helps to activate metabolic pathways that produce the hormones epinephrine and norepinephrine – which are typically produced during moments of stress on the body and provide a boost in the terms of a “fight or flight” scenario.

Epinephrine and norepinephrine are depleted quickly during these moments of stress due to a lack of L-Tyrosine.

The addition of this amino acid to RHINO BLACK PUMPED will help give you an extra PUSH and can make a big difference to help you FIGHT through your workouts and plateaus.

Hoffman et al. (2010) research results indicate that acute ingestion of supplement including L-tyrosine and anhydrous caffeine, can maintain reaction time, and subjective feelings of focus and alertness to both visual and auditory stimuli in healthy college students following exhaustive exercise.

Alpha-GPC’s brain-boosting benefits stem from the fact that it provides the body with a source of choline, which is a nutrient that is used by the brain to produce acetylcholine.

Acetylcholine is a critical neurotransmitter that the nerves use to pass along nerve signals and is what leads to muscle contractions.

Having higher acetylcholine levels allows the brain to function more efficiently. This will also improve your mind-muscle connection, which can have a major impact on muscle growth.

Choline is an essential nutrient for brain health and synaptic plasticity. Choline improves structural integrity, signaling capacity and the fluidity of neural membranes.

It’s estimated that close to 90% of the population does not get the recommended amount of choline daily. It has been shown that a dose of 500mg of Choline can boost focus, mood and concentration abilities. This is tantamount to pushing through your workout.

Utilizing this effectively dosed compound, you will be able to focus on taking less rest or being distracted during your training. Giving your 110% will really be your 110%.

A study conducted by Sun et al. (1999) reported that subjects who supplemented with choline for 4 weeks improved learning performance and memory compared to a placebo group.

Citrulline Malate is a non-essential amino acid that eventually converts to nitric oxide. Nitric oxide is a vasodilator that can help to lower blood pressure and improve blood flow to both organs and muscles.

Studies have shown that Citrulline Malate enhances exercise tolerance by reducing levels of blood ammonia and lactate that are typically elevated during strenuous exercise.

This ingredient will allow you to train with less rest in between sets and elevate your endurance capacity.

A recent research study found individuals who consumed citrulline malate for 15 days were able to increase ATP production during exercise by 34% and improve phospho-creatine resynthesis after exercise by 20%.

Betaine helps to support methylation reactions in the body which include but are not limited to liver detoxification and neurotransmitter production.

It has been shown to increase energy levels as well as muscle strength and recovery. Betaine’s effects on the neurotransmitters can help to increase the effectiveness of the “mind-muscle” connection.

A study conducted by the University of Connecticut found that individuals supplementing with 1.25 grams of betaine twice/daily increased bench press power by 20%.

Arginine (NITROSIGINE) is a precursor to nitric oxide and expands blood vessels to optimize blood flow. Silicate is contained within the walls of the arteries to help maintain their structural integrity.

These ingredients work in synergy to help increase the blood flow and the structural integrity of the artery walls. Preclinical data has shown that Nitrosigine is superior to standard arginine… with 2x the blood flow in vasodilatation response.

Taurine, has a myriad of benefits. From helping the body to metabolize fat, improving insulin sensitivity, raising testosterone levels, as an antioxidant, higher performance and quicker recovery during athletic training and increasing cardiovascular health… it goes without saying that Taurine is a great ingredient to have in your wheelhouse.

Agmatine Sulfate helps improve nutrient partitioning which leads to an increase in muscle glycogen (carbs stored in muscle tissues) which then leads to more water retained WITHIN the muscle.

This creates a fuller look to the muscles and a greater pump while hitting the iron. Agmatine Sulfate also increases NO production by working as a competitive inhibitor of the enzyme NO Synthase.

There are studies to suggest that the nutrient partitioning effects of agmatine sulfate are possibly due to its ability to increase the insulin response to carbohydrates.

This could be further explained by the increased blood flow to the muscle that occurs with increased NO production. LH and GH levels have been shown to be increased through the effects of Agmatine Sulfate and its possible effects on the hypothalamus.

Agmatine has also been shown to manipulate pain receptors which may allow you to train past normal pain thresholds.

Ornithine, when bound by salt at the molecular level to Orotate (orotic acid), is much more bio-available than in its HCL or free form. Ornithine Works in synergy with Arginine in the metabolism of waste caused by intense exercise.

By increasing Nitric Oxide production and decreasing waste – you are able to train longer and support greater results.

Glycerol (1,2,3-propanetriol) is a colorless, odorless, sweet-tasting sugar alcohol. When consumed glycerol is rapidly absorbed primarily in the small intestine, distributed equally among all fluid compartments, and promotes hyperhydration by inducing an osmotic gradient.

This brings potential benefits for endurance and stamina events, including adaptation to environmental heat/humidity stress, along with promoting blood flow associated with resistance training.

AmentoPump is the plant essence of Selaginella tamariscina containing amentoflavone whose “claim to fame” is the ability to directly enhance strength. AmentoPumpTM has some very interesting properties, varying from increased fat breakdown to vasodilation, which may also increase the body’s ability to get nutrients into muscle cells 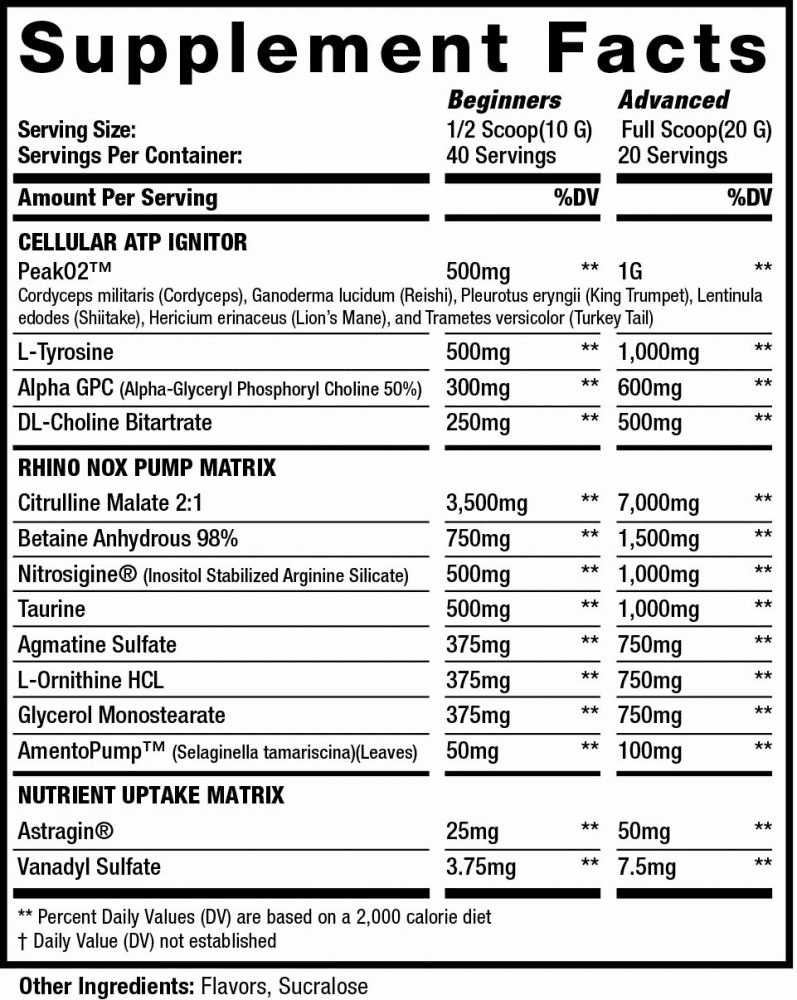 Mix one serving (20g) with 16-20 Oz of water or your energy based per-workout approximately 30 minutes prior to training.