Muscletech Mass Tech Performance Series is new and improved! Mass-Tech more protein, better quality calories, bigger results!
New Mass-Tech is an advanced muscle mass gainer designed for any individual that has a tough time adding size, is in their bulking phase and/or wants to break through their strength plateaus.
Power-packed with 80 grams of protein and 1170 mass-producing calories when mixed with 2 cups of skim milk, this potently superior formula is enhanced with proven anabolic drivers for rapid mass gain and strength!

Better-Quality Calories Designed for the hardgainer
Mass-Tech is the most versatile weight gainer available, which can be taken once daily or split into two separate half servings.
The new, powerful formula now delivers a massive 1170 calories derived from high-quality protein and quickly digested carbohydrates, as well as specialized fats.
More Protein per Serving Than Other Weight Gainers
New and improved formula features an 80-gram multi-phase protein system,
when mixed with2 cups of skim milk that supplies fast, medium and slow-digesting proteins.
The multi-phase protein system provides critical amino acids to the body at varying speeds for extended delivery of amino acids in the blood.

More BCAAs and L-Leucine per Serving Than Other Weight Gainers
The formula’s protein dose when mixed with 2 cups of skim milk supplies a massive 7 grams of L-leucine and 13 grams of BCAAs, which help fuel your skeletal muscles, preserve muscle glycogen stores and help to reduce the amount of protein breakdown.
Added Amino Acids for Enhanced Effects
Beyond the key ingredients it supplies, Mass-Tech also provides additional ingredients, such as a 3-gram dose of L-alanine. L-alanine is the second most used amino acid after L-leucine in protein synthesis.
It has even been noted to play a role in glucose production for usable energy.
The formula also delivers a 3-gram dose of glycine, an amino acid that may help in the formation of many other biological compounds in the body, such as proteins and creatine.
Taurine was also included as it’s the second-most abundant amino acid found in muscle, after glutamine, and aids cell volumization.

Build Strength Faster
Unlike other leading gainers that contain little to no creatine, Mass-Tech delivers a 10-gram clinically validated dose to increase strength fast.
Help Replenish Glycogen Stores
Supplies 168 grams of carbohydrates through a multi-phase carb complex to both spike insulin, quickly shuttling creatine into the muscle, and promote muscle glycogen replenishment, helping to put the body into an anabolic state.
Formulated with Omega-Rich Fats
The full-spectrum formula contains less saturated fat than other weight gainers and is formulated with 5 grams of omega-rich fats, which provides energy-dense calories.
Get More for Your Money
Unlike the competition, Performance Series products contain superior key ingredients in clinically dosed amounts that are fully disclosed so you know exactly what you are paying for.
Best-In-Class Taste
Every flavor won in head-to-head third-party taste tests against the leading competitors.

Seize the Power that Comes with Colossal Size
Team MuscleTech researchers have developed the ultimate scientific mass gainer – Mass-Tech.
The powerful formula is precisely engineered with over 1000 calories and 70 grams of protein that supplies 10 grams of BCAAs when mixed with two cups of skim milk. With this amount of protein,
Mass-Tech is designed to induce hyperaminoacidemia, a dramatic rise in amino acid levels.
This can trigger increased protein synthesis – the key mechanism that drives explosive muscle growth!

This mass builder is infused with a mega-dose of the most researched form of creatine available!
Team MuscleTech researchers also loaded the formula with the most scientifically researched form of creatine available and an advanced driver shown in leading university research to increase absorption of this key mass building compound.
Simply put, Mass-Tech is designed to deliver profound and noticeable results!

Powerful, Effective and Tastes Amazing!
Not only is Muscle Tech Mass Tech Performance Series scientifically formulated to be extremely powerful and effective, it’s also formulated with 17 vitamins and minerals and has been designed with a flavor system that absolutely tastes amazing while delivering zero trans fat and zero aspartame!
Muscle Tech Mass Tech Performance Series is the new gold standard for mass gainers. GET IT TODAY!

Founded on University Research for Noticeable Results!
Test subjects gained more than 5 times the mass and added size to their arms and chests without a significant increase in abdominal circumference.
These are the exact results from an eight-week research study conducted at California State University, Long Beach,
on 73 untrained subjects divided into three groups, and published in the Journal of Sports Medicine and Physical Fitness.
The researchers in the study examined the addition of 2000 calories (the amount found in two servings of Mass-Tech each mixed with two cups of skim milk) to a high-protein diet and a weightlifting program.

What is Muscle Tech Mass Tech Performance Series?
Mass-Tech is a powerful weight-gain formula developed with key mass building compounds that are shown in research to help increase size, strength and overall mass.

What’s in Muscle Tech Mass Tech Performance Series?
Mass-Tech contains a precise caloric amount studied in research at an American university!
When mixed with two cups of skim milk, Mass-Tech delivers over 1000 calories and 70 grams of protein that supplies 10 grams of BCAAs.
The formula also contains 17 vitamins and minerals and the most scientifically researched form of creatine in the world.
Additionally, Mass-Tech contains zero trans fat and zero aspartame.

How does Muscle Tech Mass Tech Performance Series Work?
When used as directed, Mass-Tech delivers the amount of calories shown in university research to help test subjects gain a significant amount of mass.
The formula is also designed to induce hyperaminoacidemia, a rapid and dramatic rise in amino acid levels. This leads to increased protein synthesis, which is a key mechanism that drives explosive muscle growth.
Additionally, Mass-Tech is also engineered with an advanced driver designed to spike insulin, which helps increase muscular creatine absorption.

How do you take Muscle Tech Mass Tech Performance Series?
Mix 1 serving (5 scoops) of Mass-Tech with 16 oz. of skim milk two times daily.
Drink the first serving between breakfast and lunch and the second serving before bed.
Do not exceed 2 servings in a 24-hour period.
Drink 8 to 10 glasses of water daily for general good health. Read the entire label before use and follow directions provided.

The Protein Source Dilemma: Which to Choose?
Protein sources vary in usability and absorbability. Find out which protein source is best for you and when you should take it.
Protein is made up of amino acids, which are building blocks of muscle. By consuming protein at different times (in the morning, between meals, before training, after training, before bed, etc.),
you are giving your muscles the fuel to recover from workouts and build up bigger and stronger than ever! So, which protein source is best?
This all depends on when you’re taking it. 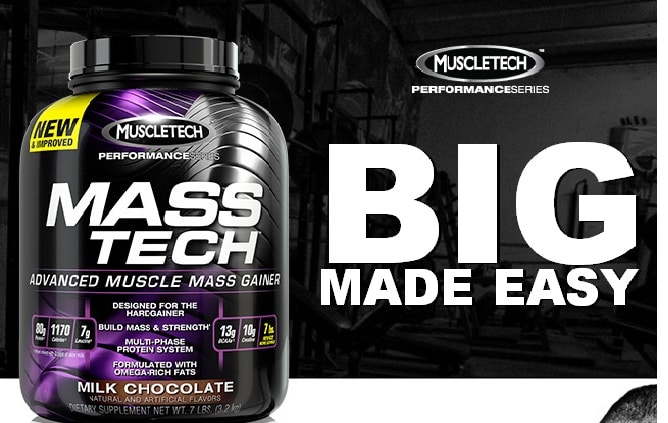 Directions For MASS-TECH: Mix 1 serving (5 scoops) with 16 oz. (470 mL) of water or skim milk and consume either in the morning, between meals or post-workout.
If preferred, you can consume 1/2 serving twice daily. Read the entire label before use and follow directions provided.

Warnings: Do not use if pregnant or nursing.
Consult a medical doctor before starting any diet or exercise program.