Performax Labs Nootropi Max is a cutting edge cognitive enhancer. In athletics, the difference between winners and losers may come down to one play or one moment, and the victor is the one with that extra something that pushes them through to the finish line. That is where focus comes in – any lapse in attention is a weakness that your opponent will exploit, whether your opponent is man, woman, or that bar of iron in your hands. If you want to grow, it is all about that last set, that last rep, one more, one more, until you achieve total muscular failure. Laser-beam focus in the gym allows you to wring every last drop of sweat out of your body, which is the best way to push through those plateaus and achieve greater results. Cognitive enhancement through supplements, or nootropics as they are known, is an excellent way to sharpen that focus so that it cuts like a knife through fatigue, distraction, and anything that might get in the way of achieving greatness.

Performax Labs Nootropi Max has been formulated using cutting-edge science to combine molecules that will work together synergistically to give you clean, long-lasting, razor-sharp focus with no jitters and no crash. The scientists at Performax Labs have scoured the Earth to find the best and most potent cognitive-enhancing compounds. Thoroughly researched ingredients like caffeine are combined with di-caffeine malate and theacrine to provide longer lasting benefits. Other molecules produce anti-stress effects so that the jitteriness and anxiousness that may sometimes occur with stimulants are obliterated. Additional elements increase neurotransmission and neuroprotection. In all, Performax Labs has designed a nootropic that delivers on all levels: attention, focus, memory, reaction time, and increased velocity on the neuronal level.

The first pillar of this powerful formula is Bacopa monniera, a highly touted Ayurvedic herb with centuries of use and a reputation for boosting memory, attention, and focus.

CDP-choline is a must-have ingredient for your nootropic arsenal. It is a great source of choline, an essential nutrient (recently added to the list of vitamins) that aids in building DNA, cell membranes, and neurotransmitters that are necessary for muscular contraction (acetylcholine). Importantly, it is one of the only choline sources that crosses the blood-brain barrier.

Ornithine is an amino acid that is an intermediate in the urea cycle – similar to arginine and citrulline. Perhaps due to its effects on ammonia reduction in the body, ornithine reduced feelings of fatigue by 52% after a prolonged endurance test (2 hours of cycling).

Caffeine is a well-known cognitive enhancer and mental stimulator. Whether utilized in morning beverages, energy drinks, or pre-workouts, caffeine is a staple for attention and focus.

Di-caffeine malate delivers all of the cognitive benefits of caffeine while addressing some of the downsides. By ionically bonding malic acid with two caffeine molecules, the malic acid serves as a buffer, thereby reducing the GI distress that some people feel from caffeine alone.

An essential addition to this cutting-edge formula, L-theanine helps you to relax without putting you to sleep while actually increasing attention. Seems impossible, right? Its anti-stress mechanisms reduce anxiety that is sometimes associated with stimulant use without causing any drowsiness.

Theacrine is another compound that works synergistically with caffeine. An alkaloid with a similar chemical composition as caffeine, theacrine operates in the same adenosine signaling pathways as caffeine.

Sceletium is a succulent plant commonly found in South Africa and used traditionally to lower stress and improve concentration during hunting. In Nootropimax, the sceletium has been standardized to 0.5% alkaloids and 0.2% mesembrine, ensuring high potency and effectiveness.

This ingredient provides excellent neuroprotection as increased cognitive benefit. This fast-acting molecule has similar effects to the popular racetam family of nootropics, but at a fraction of the dosage.

Huperzine is a compound known to inhibit acetylcholinesterase, the enzyme that breaks down acetylcholine. The subsequent increase in acetylcholine results in better learning and improved muscular contractions. 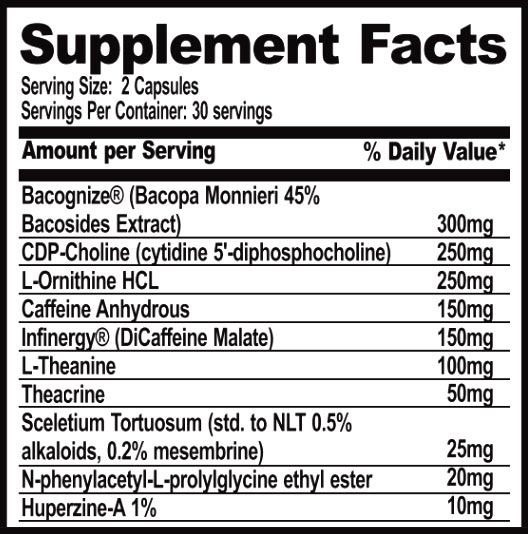 When it’s time to bear down and get in the zone for work or studying, consume 2 capsules daily for enhanced brain gains and long-lasting focus.