The Universal Animal Shred Stack includes a combination of the universal’s most aggressive for body fat reduction product and the world famous Animal Pak. The utilisation of these two products creates an ultra-thermogenic environment for the subject to allow rapid drops in body fat.

The True Original since 1983, the Universal Animal Pak was developed to cover the wide backs of the hardest and heaviest trainers on the planet Earth. The “Ultimate Training Pack” is far more than a mere multivitamin, but is the trusted, sturdy foundation upon which the most dedicated bodybuilders and powerlifters have built their nutritional regimens, since the supplement industry was in its mere infancy.

If you’re training or dieting hard for a contest, the first thing that happens when you don’t take the Animal Pak is that nutritional gaps begin to form. Why should you care? Because over time, these deficiencies continue to grow. Eventually, your body will stop functioning at its optimum level. In other words, you hit the wall, your development reaches a plateau. In fact, even if only one key nutrient is missing from your diet, your body could shut down the anabolic drive needed to build muscle so that it can support more critical metabolic processes. When this happens, you stop growing.

Research has proven that strength athletes such as bodybuilders and powerlifters, due to the intensity and frequency of their training programs, have higher nutritional requirements than regular athletes. Studies have shown that these unique needs are greatly increased for bodybuilders who regularly compete and need to diet down. During calorie-restricted diets (diets which tend to be repetitive and monotonous, e.g., rice and chicken), the potential for nutritional deficiencies increase dramatically.

More alarming is the fact that championship-caliber bodybuilders, even when supplementing with a regular multivitamin, were still experiencing significant nutritional deficiencies. A basic multivitamin supplement won’t be enough. Competitive bodybuilders know that a superior multivitamin is the first line of defense. This fact is confirmed by studies which have revealed that 100% of Olympic weightlifters and over 90% of competitive male and female bodybuilders use a vitamin/mineral supplement like Animal Pak.

These nutritional gaps not only affect your performance and size, but they begin to impact the way your other supplements work. For many of today’s supplements to work efficiently, your body needs to be running on all cylinders. Nutritional gaps mean that your supplements may be rendered ineffective. For example, many supplements rely on enzymes and other substances in your body to “activate” them. Poor nutrition means poor conversion and activation of expensive supplements. Animal Pak is your insurance policy to prevent this from happening. The Pak helps ensure you are maintaining an anabolic internal environment, one primed for muscle growth and optimum performance.

With Animal Pak, you get plenty of everything you need. And a few extras. In every pack, you get a vast arsenal of over 60 key ingredients that are delivered in the right amounts at the right time, every time. Each of the 11 tablets included in each pack has been specifically formulated to deliver the goods—ample doses of vitamins, minerals, amino acids, herbs and other performance optimizers designed to stand up to the most intense training and rigorous dieting.

Consider the Animal Pak as the cast iron skillet of your supplement program, your body’s first line of defense. If you train with weights, then you absolutely need to train with the Animal Pak. Remember, while most supplements have come and gone, precious few have stood the test of time. When you’re ready for the best, step up to the most trusted name in serious bodybuilding nutrition: Animal Pak. What IFBB pros and Mr. Olympia competitors have used since ’83. What the best of the best depend on, when the going gets tough, and every set, rep and meal matters the most.. The legendary Animal Pak.

Now also available in convenient and tasty powder form. All the potent power of Pak, that can be easily stacked in the same shaker cup as your Whey, Rage XL or Juiced Aminos. The True Original now makes room for The NEW Original, Animal Pak Powder.

Universal Animal Cuts is designed specifically with the needs of advanced bodybuilders in mind, Cuts was formulated to produce dramatic changes in an athlete’s physique in a brief period of time. To get ripped, shredded, peeled… That was what the Cuts user demanded and that is precisely what they got. That was then and this is now, and though so much has changed, some things always remain the same. Where the supplement advancements of 2009 meet the original Animal ethos, you’ll find the brand new formula of Animal Cuts.

The new Cuts formula is advanced and complete, including ingredients designed to stimulate metabolism and thermogenesis, training focus and diuresis, muscle preservation and thyroid function as well as providing added energy and suppressing appetite. In this way the Cuts formula is everything the dieting iron athlete needs, totally comprehensive–the supplement bottom line when it comes to displaying the hard muscularity you seek. It is up to you to supply the desire, to stay on your diet and eat clean, to bring it in the gym and on the treadmill. You put in the hard work and Cuts will take care of the rest.

Though it seems impossible to top the results reported by the legions of Cuts loyalists over the years; those that have long regarded Animal Cuts as their secret weapon in the fight against bodyfat, that was exactly the intent from the get-go for the brothers behind the scenes at Animal. It was a tough task, but tough is the only way Animal knows. The higher our standards, the better our products, the more legit your results. Cuz at the end of the day, just like us, results are all you give a f*ck about anyway.

With Animal Cuts you get an all inclusive product. It ain’t your conventional fat burner. This new Animal Cuts formula maintains the spirit of the old—comprehensive and complete fat shredding power, just taken up to the next level. Unlike most conventional “fat burners” out there, Animal Cuts is more than just a thermogenic. It is a complete and comprehensive fat shredding formula that targets fat loss from multiple angles. Each convenient pack now delivers over 40 active ingredients. Every day, for 21 consecutive days, you’ll get nearly 8,500 milligrams of pure fat shredding power to kick start your cutting goals and is made up of eight distinct components: (1) thermogenic complex; (2) metabolic complex; (3) thyroid complex; (4) diuretic complex; (5) nootropiccomplex; (6) cortisol inhibiting complex; (7) CCK Boosting Complex; and (8) our special bioavailability complex. 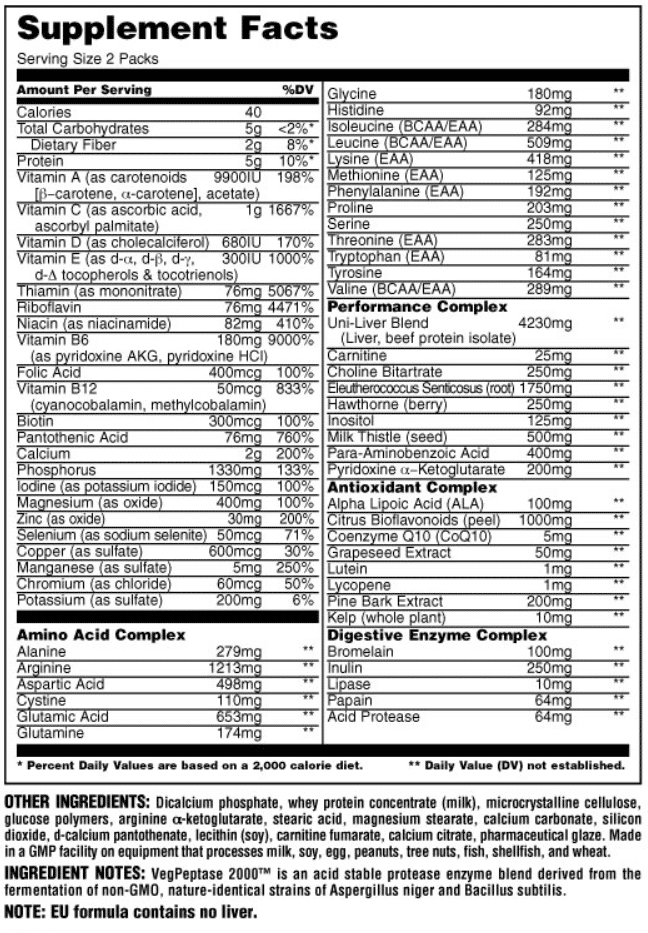 Directions: Take a single pack with breakfast or any other meal, with plenty of water. For those who compete or are training with higher intensity, take two packs daily, separated by 4-12 hours.

Warning: Made in a GMP facility that uses milk, soy, egg, peanuts. 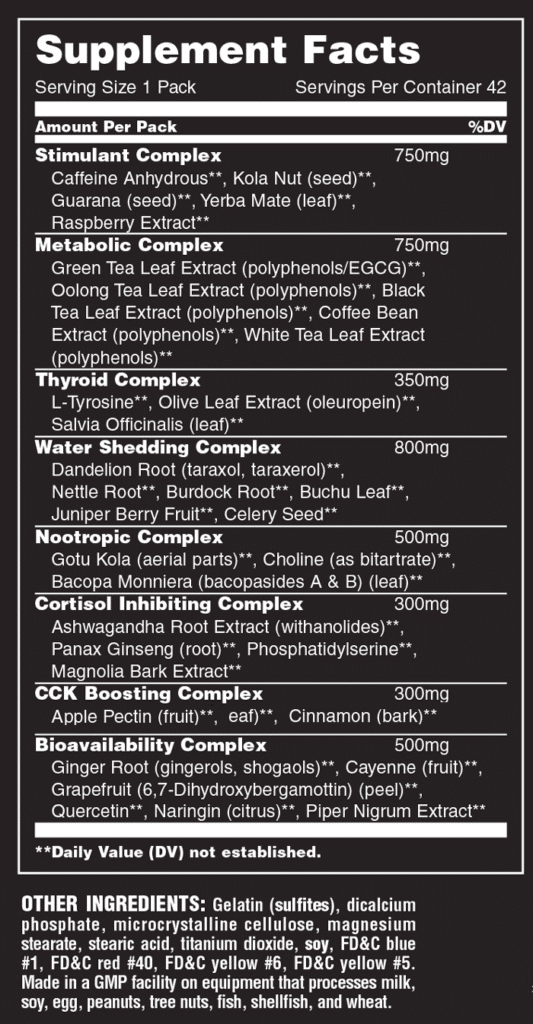 Directions: Take 1 pack a day for 3 straight weeks. After the week off, you can run it again.

WARNING: Not for use by individuals under the age of 18 years. Do not use if pregnant or nursing. Consult a physician before using this product.

Not intended to replace normal food.

KEEP OUT OF REACH OF CHILDREN.