Few brands in the supplement world have the reputation, and the longevity, of MuscleTech.

They have been in business since 1995, long before the internet became mainstream and years before social media exploded the world of supplements.

Many companies have come and gone in this time.

But MuscleTech continues to go from strength to strength, thanks to a very wide range, first class branding, exceptional product-to-product reputation – and the fact that they partner with universities to produce new ranges.

Creatine first entered the public consciousness in 1992 when it emerged that athletes at that year’s Olympic Games in Barcelona used the now common supplement.

In 1993 a company called EAS released one of the first commercial supplements containing Creatine.

Supplement companies scrambled to get on board this craze and in 1998 MuscleTech released Cell-Tech.

It is now the most extensively researched, and arguably the most well-used, Creatine Supplement in the world.

They released NitroTech soon after, which has become one of the most popular protein brands ever produced. 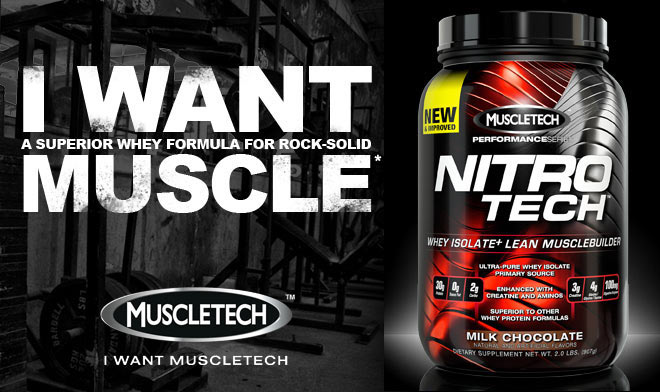 MuscleTech was founded by Iovate Health Sciences International Inc in 1995 and entered the market with three products:

Unlike many supplement companies that exist for profit, MuscleTech puts a significant amount of their money back into research and development.

Based in Canada, numerous partnerships with top ranked universities helps their R&D program remain cutting edge, with their latest partnership being with the University of Toronto.

WIth an annual sponsored research income exceeding one billion (USD), the University of Toronto’s reputation is unmatched in science and medicine.

They discovered Cygnus X-1, the first evidence of a Black Hole in 1972, and were responsible for one of the most significant events in the history of medicine – the discovery of Insulin in 1921.

In 2016, MuscleTech, the best selling supplement brand in North America, took a major step in their brand penetration to China.

Xiwang Foodstuffs Company, owned by Xiwang Group, one of the top 500 companies in China, announced a $730 million (USD) acquisition of Iovate Health Sciences, and hence MuscleTech.

Announced on 16 June, 2016 by Iovate Health Sciences International, the majority equity investment was not designed to affect MuscleTech negatively.

Quite the opposite, it allowed the company to boost sales in Asia while the Canadian headquarters, and global team, remained intact.

This has allowed MuscleTech to continue their global penetration, now sold in over 140 countries worldwide.

Some of MuscleTech’s products are now considered to be the best in the world, led by products like CellTech.

Add to this their new Black Oynx series and the tried-and-tested Hydroxycut, and it is little wonder why so many turn to MuscleTech.